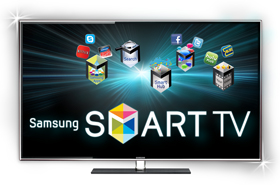 I’m sure there’s a pretty solid economic explanation for this delay, but all analysis aside, there has been some development on this front and we might live long enough to enjoy the results. Samsung for one is making an effort to correct this miserable situation and breathe some life into our TV sets.

Since they announced its Smart TV platform at the 2010 CES, Samsung has so far made impressive results. With over 2M Smart TV units sold so far, it proves to be an excellent move. The App Store (combining TV and Bada apps) features well over a thousand TV apps and continues to grow.

From a consumer perspective, the Smart Hub (Samsung App Store) is the entry point into the app world. Unfortunately, the choice of apps you find in there will probably depend on things like your country of residence, TV model and similar.

For developers, things look promising. Samsung provides a well equipped SDK and tool set, as well as substantial documentation to give you a solid start-up. Check out www.samsungdforum.com. However, keep in mind that only US developers are currently allowed to submit TV apps into the store. Let’s hope this changes soon enough.

Applications are basically web apps (HTML, JavaScript) with extensive APIs providing access to various functionalities of the (Linux 2.6 based) device. For completeness sake, we should point out that Adobe SWF and Lua Script apps are also supported. 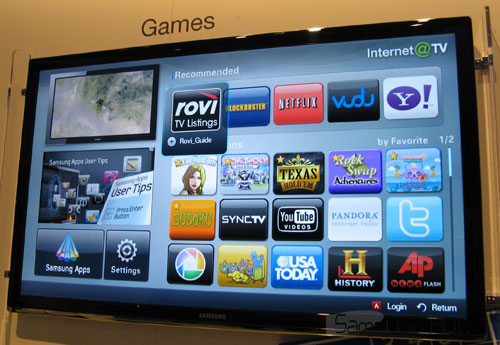 There have been 2 major SDK releases so far, 1.5 and 2.3, accompanying the 2010 and 2011 TV engine releases. If your TV was made in 2011 you’re definitely better off since you are able to utilize the latest web “candy”: CSS3 and HTML5. Overall, developers are provided with access to a number of APIs, such as: File storage API (with poor security), TV Key API (for remote control), External Device API (for access to devices such as the Blu-ray player) as well as native image and video players.
Check out a detailed SDK comparison here.

Device convergence is an area where Samsung sees great value (and it’s difficult to disagree!), especially between the Smart TV and the Galaxy family led by the highly successful Galaxy S II. The Interactive Mobile Device App API was designed specifically to support such solutions. Galaxy owners can already try out Samsungs Smart View mobile app which demonstrates some really innovative solutions, such as content streaming from the TV to multiple mobile devices!.

Judging by consumer and developer acceptance so far, Samsung has created a huge potential for new solutions.
We’re very excited to be involved in this process and also happy to announce much more tech details on our blog!

Solving the binding problem with Swift

In a fight for great software architecture, our hands are often tied by the shortcomings of frameworks or languages we work with.

Breaking up with Unity

…for 2D Mobile Introduction Unity is one of those game engines you keep hearing about. It…