Farmigo is a company that is fixing the existing food chain. They’re a farm to table startup which means they connect farmers and food producers directly with consumers. Everyone can order fresh and delicious food and have it delivered to a nearby community of their choice.

Farmigo’s entire approach is designed around people. The farmers get a far better deal than they do in the supermarkets. The community organizers fundraise money for their communities, gardens and schools. And of course, the end customer gets an honest and fresh delivery that ‘cuts the middle man out’ of the food chain. 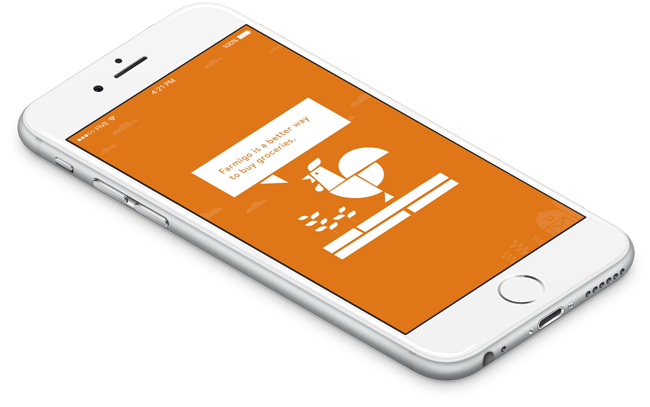 Bringing the farm-to-table to mobile.

When our partnership started out in early 2015, Farmigo had a growing user base, but with only a web presence, they still didn’t tap into their entire user potential.

Because of the way the system works, there was a huge potential in using the app to remind people to place orders, alongside allowing them to have a more streamlined user experience. In thinking about the product, we had very direct KPI’s to follow.

Together with them, we defined their mobile strategy through product design fit for a startup’s MVP. We kicked off the project with a Design Sprint workshop that jump started the collaboration. The week long workshop included stakeholder interviews, defining a primary user journey and an app map, creating key app screens connected in a prototype and getting feedback from users on the last day.

What followed were dedicated UX Design and UI Design phases with our typical Five recipe for success: a lot of iteration, testing with prototypes, and being very nimble in this process. Farmigo’s design team was a crucial partner in delivering a great design in the end.

The app has two faces, a consumer one and an organizer one. For the consumer it was important to have a friendly, fast and responsive experience when ordering food, editing orders or just duplicating last week’s order. What sets Farmigo apart from the competition is the community part and we wanted to make sure that plays a large part in the app. Users can quickly find out more info about their community and reach out to the organizers. For the organizer side of the app, this is helping in fulfilling orders, communicating with their members and honestly, replacing a bunch of analog tools they had to use before.

We put a lot of focus on expanding the Farmigo brand identity through pieces native to the app space: interaction paradigms, relevant animations and a UI that conveys top keywords such as honest, friendly and fresh. These are not only ‘moments of delight’ but truly detailed pieces that help reinforce the brand and the message it’s trying to convey.

Our collaboration was even more prominent in the development phase. Since the mobile application relies heavily on existing APIs and structure there was a day to day communication channel established between remote teams. We delivered two functional internal versions before heading to the app store.

* Farmigo is a Series B startup with operations in the New York and Bay Area and recently launched Seattle. They are a scalable alternative to the traditional supermarket, and we would love to for your first Farmigo experience to be a mobile one. Download the app on the App Store.