The Simple Guide to Product Testing

I want to start by saying that we’re testing [the product], and not you. You can’t do or say anything wrong, and nothing is going to hurt our feelings.

…at least that’s what we say to every single user during our in-person testing sessions. And we mean it. We’re not actually testing the user, right? We’re testing the product, regardless of the stage it’s in — from a concept to a healthy, released product.

When we’re at the very beginning of a new project and validating a product idea through testing, we are miles away from proper usability testing (which we do later in the project). This, for instance, is just one of the reasons we don’t refer to these sessions as usability testing nor user testing, but rather — product testing.

These guidelines are not only for teams already building products but also for anyone that just started to think about new product ideas and ways to validate them.

While there are multiple things to keep in mind when planning and conducting a product testing, here’s a simple list that can help you focus:

1. Start testing the very first week of the project

As an agency, we start new projects with a short discovery / research phase followed by a hands-on workshop called Design Sprints. Sprints are great when kicking off new initiatives, testing new product ideas, features, etc. We end the workshop by creating a medium fidelity prototype (a rapid process for us with tools like Sketch and InVision) that we then test with users. We want to validate the direction we’re heading at the very start.

Can you imagine how rewarding that is? There was almost nothing a couple a days ago — now there is a concept, a business case, and actual feedback from real customers.

What a great way to start a project.

2. Do more than “just” usability testing 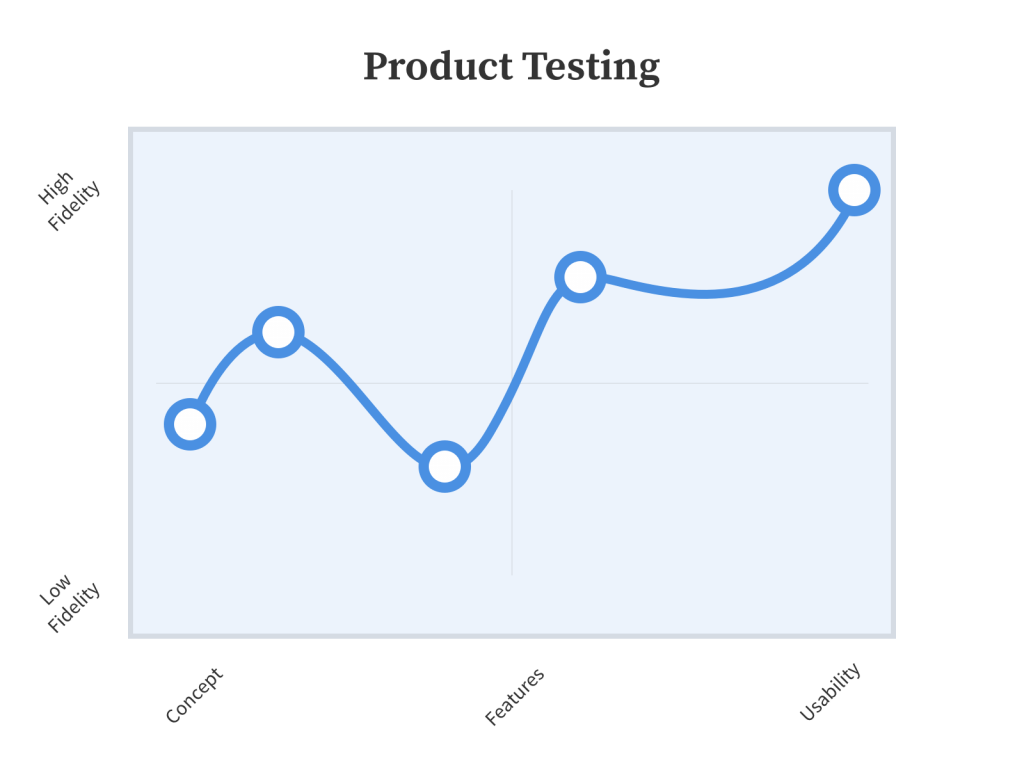 The priorities in testing sessions change as the project evolves. We might start out really heavy on validating the product idea and prioritizing features, but as we progress, we focus less on that and more of how things come together.

Let’s discover how the testing focus shifts throughout the project:

You’ve heard this a million times — 5 participants in a testing session is enough to get the majority (circa 85%) of the feedback you need at that point.

What’s important to note is that’s actually five users per a target group, meaning if you have a primary and secondary type of users, you need to multiply that number.

Identify people who match your demographics (or even better: match your personas) and then screen for behavioral traits, attitudes, and goals that match those of your users. —NN

We tend to always have six humans recruited (plus floaters available for morning and afternoon sessions). The tendency to do more than five comes from experience — sometimes users that show up aren’t a good match, sometimes the A/V has issues or there is a fire drill (happened more than once!).

A very important thing for the entire team to realize is that early concept testing is by no means enough. Even though a project is underway, there should still be regular testing sessions as the designs get more fidelity, longer flows, richer features… as the final UX prototype has been created, as we jump into development.

The most important thing is to guide those tests towards the desired outcome. For instance — in testing the product in the visual design phase, it’s important for the tests, assumptions and goals to focus on items directly related to this phase. While I’m positive you will encounter feedback related to other things that what you intended to test (everything from product fit to the actual user experience), capture that feedback and pencil it into the product roadmap.

5. Take care of the details

As always in life, the details are not the details. We’ve seen completely different testing results when one or more of details were not executed with care. It’s important to keep the story we’re telling to users alive and not to break the flow.

Our user needs to stay in the shoes we’ve asked her to put on.

At the end of the day

The most striking truth of the curve is that zero users give zero insights.

If you’re doing product design, you should do product testing as well. We hope this guide helps you in this process.

How to execute a successful Product Strategy – Part 2

In the second article in our series How To Execute A Successful Product Strategy In 2020, we’ll continue with Product Discovery and talk about what happens after completing feature prioritization and defining a deliverable scope.