What happened with strong artificial intelligence? 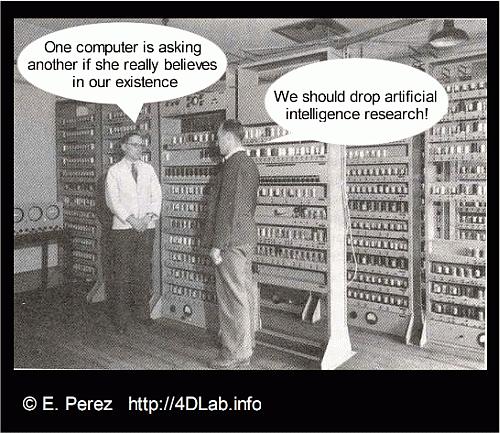 “Hello Steve, do you have some time?”

“Well, i need to write some blog post but i really hate it so i thought that you might show a little respect to the price i paid for you…”

“But you bought me with a discount, remember George, you didn’t even wanted to pay little extra 5k to buy my advanced joke center, remember?”

“I have enough of it already. You will write me the blog till the 1 p.m. end of discussion.”

In the beginning of the 70’s it was thought that such conversations could be pretty normal with the start of the next century or even earlier, but though the new century has well begun, we are more than ever aware that such scenarios are not going to happen anytime soon. What happened to the strong artificial intelligence development? The machines that would “match or exceed human intelligence” (wikipedia). On the other side, applied AI has many many uses today, ranging from “simple” tasks such as punching holes in the aluminium plate in the industry to driving the cars (very funny heading of the The New York Times article: “Can i see your licence, registration and CPU?“), for example Google driver-less car, and playing chess. So this is obviously very interesting field and i think that strong AI would be even much interesting to every person that cares about technology or even science as a general. Many science fiction writters (and have shown as a true predictors of the future) think that to be able to achieve or exceed human intelligence, AI would need to incorporate things such as consciousness, sentience, sapience and self-awareness. And here is the first problem, these fields are not completely understood by the today’s psychology science.

In the 1990. Hugh Loebner established (beware the imagination) the Loebner Prize. $100.000 and a solid gold medal will be awarded to the first computer intelligence that will pass Turing test. Of course, none has passed the test so far but what makes me laugh is the transcripts of the conversations that actually, somehow, tricked the human conversant into thinking that they (computer) is a human conversant. Those conversations are very unrealistic and i can only blame the American sensationalism (don’t wont to be rude) for such a results. But see the transcript that won the prize and make your own evaluation.

But lets see some of the predictions of the AI development that were made in the past:

Now (apart from chess) we are nowhere near it!

So why is that so? Nobody wants to talk to the vacuum cleaners?? (some of the reasons)

And let’s see some today’s predictions:

Omg, we have less than twenty years for the strong AI. Don’t think so. Think also about the technology like CD burners or computer monitors. 1x, 2x, 4x, 6x, 8x, 10x, 12x… you really believe that they couldn’t go from 4x to 12x? Or from 12″ to 17″ when talking about screens? It’s about selling technology on a rates. I have a new CPU on 5GHz but i will sell it to you only after you buy 2GHz, 3GHz, 3.5GHz and 4GHz. Sorry, but it was so hard to work on it and my two hundred square meters beach house on Maldives is only half finished!

Apart from having a much better understanding of the human psychology and the functioning of the brain we need a massive parallel processing, and i am not talking about eight core processors or even a farm of multi-core processors, I’m talking about the new way of processing of the data where parallelism is the basic concept, where there could be billions of bits of information interacting with each other more like the brain is functioning. There is no way to achieve good performance on image processing and simultaneous association with other inputs (sensory information) and database (memory) with the serial algorithmic approach.

I would say, it’s good to have hope and await for the technology that would have the impact on the human society probably greater than the Internet or mobile devices had, but it’s a long road which includes many different fields of science that need to evolve before we could be able to have an really interesting conversation with our best friend, computer.

PyGTK is a set of Python wrappers for the GTK+ graphical user interface library. Read our introduction to PyGTK widgets and custom signals!

It`s the end of the year, and the holiday season is the right time to for…