In the first part of the series, we covered the mistakes we had made on our path to finding the architecture that works. In this part, we will present the so-called Clean Architecture.

The first image you come across when you google “clean architecture” is this: 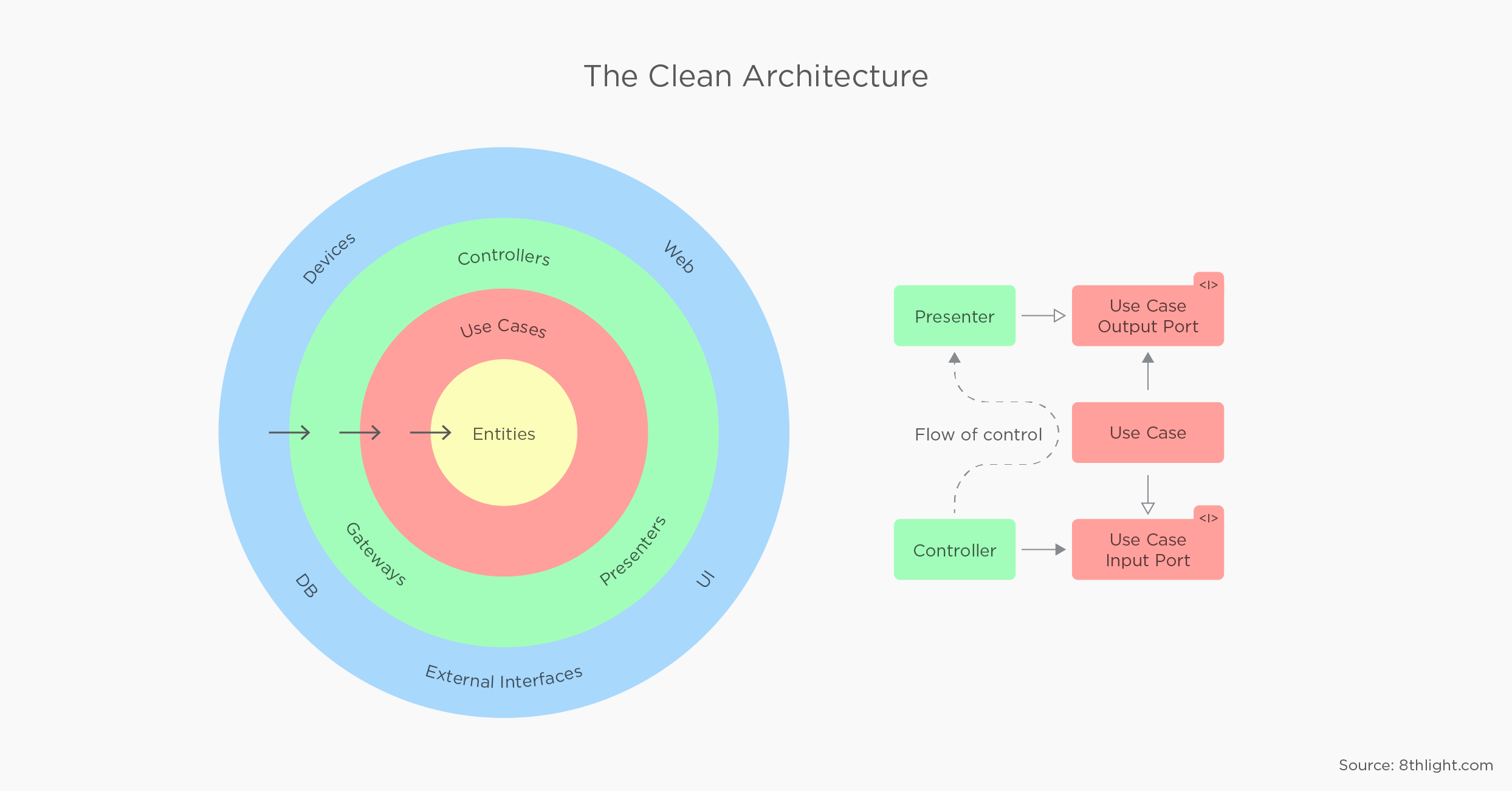 It is also known as onion architecture, because the diagram looks like an onion (and it makes you cry when you realize how much boilerplate you have to write); or ports and adapters, because there are, as you can see, some ports in the bottom right corner. Hexagonal architecture is yet another similar architecture.

Clean architecture is the brainchild of previously-mentioned Uncle Bob, who also wrote books on Clean Code and Clean Coder. The main point of this approach is that the business logic, also known as domain, is at the center of the universe.

Master of your domain

When you open your project, you should already know what this app is all about, regardless of the technology. Everything else is an implementation detail. For example, persistence—it’s a detail. Define an interface, make in-memory a quick and dirty implementation, and don’t think about it until the business is done. Then you can decide how you really want to persist the data. Database, internet, combination, file system—maybe leave them in-memory, maybe it turns out you don’t have to persist them at all. In a sentence: inner layers contain business logic, outer layers contain implementation details.

That being said, there are a couple of features of clean architecture that enable that:

Dependency rule can be explained by the following diagram: 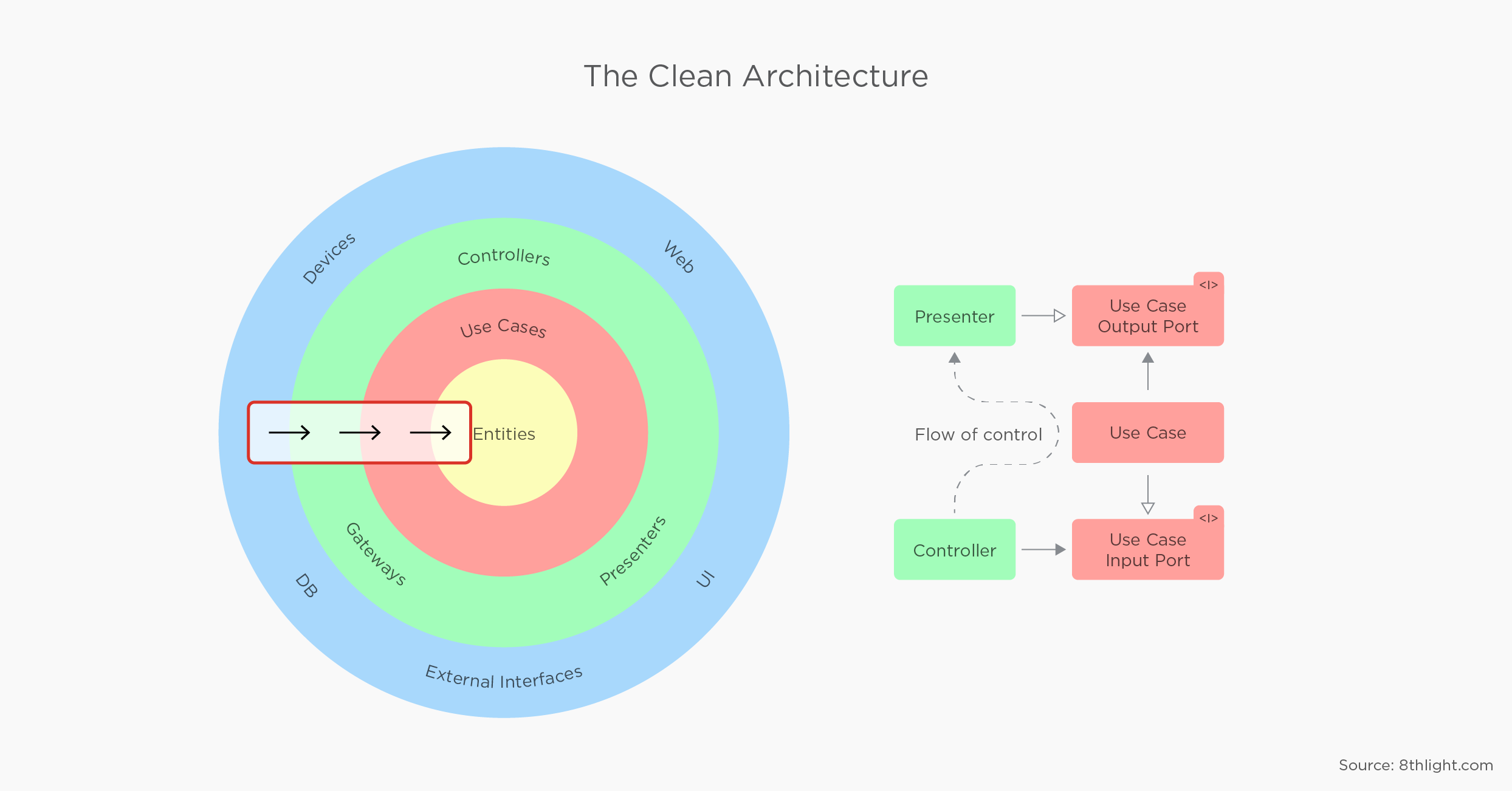 Outer layers should depend on inner layers. Those three arrows in the red square represent dependencies. Instead of “depends on,” maybe it’s better to use terms like “sees,” “knows about,” or “is aware of.” In these terms, outer layers see, know about, and are aware of inner layers, but inner layers neither see nor know about, nor are aware of, outer layers. As we said previously, inner layers contain business logic and outer layers contain implementation details. Combined with the dependency rule, it follows that business logic neither sees, nor knows, nor is aware of, implementation details. And that’s exactly what we are trying to accomplish.

How you implement the dependency rule is up to you. You can put it in different packages, but be careful not to use “outer” packages from “inner” packages. However, if somebody is not aware of the dependency principle, nothing would stop them from breaking it. A better approach would be to separate the layers into different Android modules, for example, and adjust dependencies in the build file so that the inner layer simply cannot use the outer layer. At Five, we use something in between.

One more thing worth mentioning is that, although nobody can stop you from skipping layers—for example, using some red layer component from the blue layer component—I strongly encourage you to access only components from the layer next to yours.

Abstraction principle has already been hinted at before. It says that, as you are moving towards the middle of the diagram, stuff becomes more abstract. That makes sense: as we said that the inner circle contains business logic and the outer circle contains implementation details.

You can even have the same logical component divided between multiple layers, as shown in the diagram. The more abstract part can be defined in the inner layer, and the more concrete part in the outer layer. 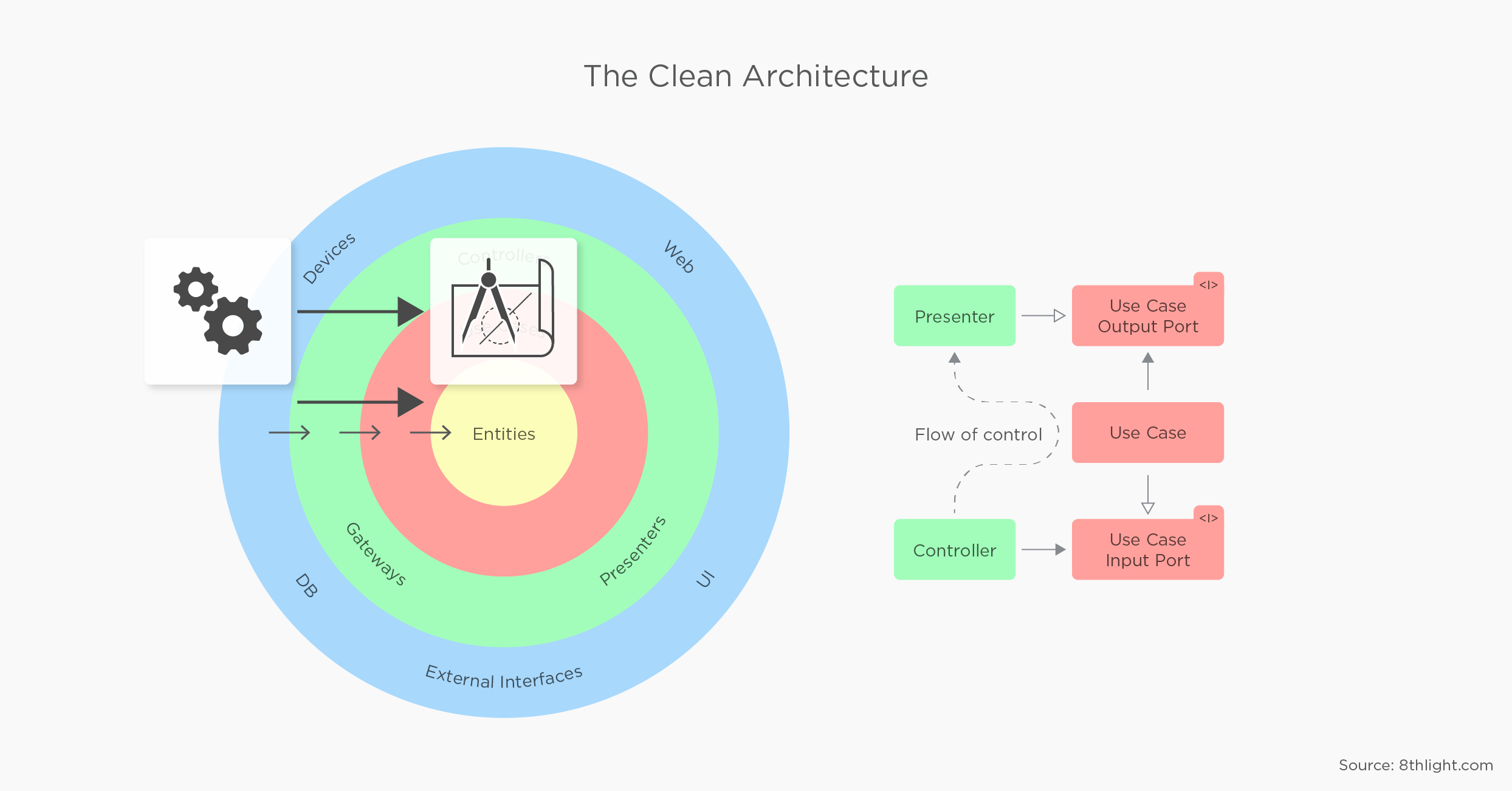 Let’s just briefly compare this to how abstraction and dependencies look and work when using standard three-tier architecture. 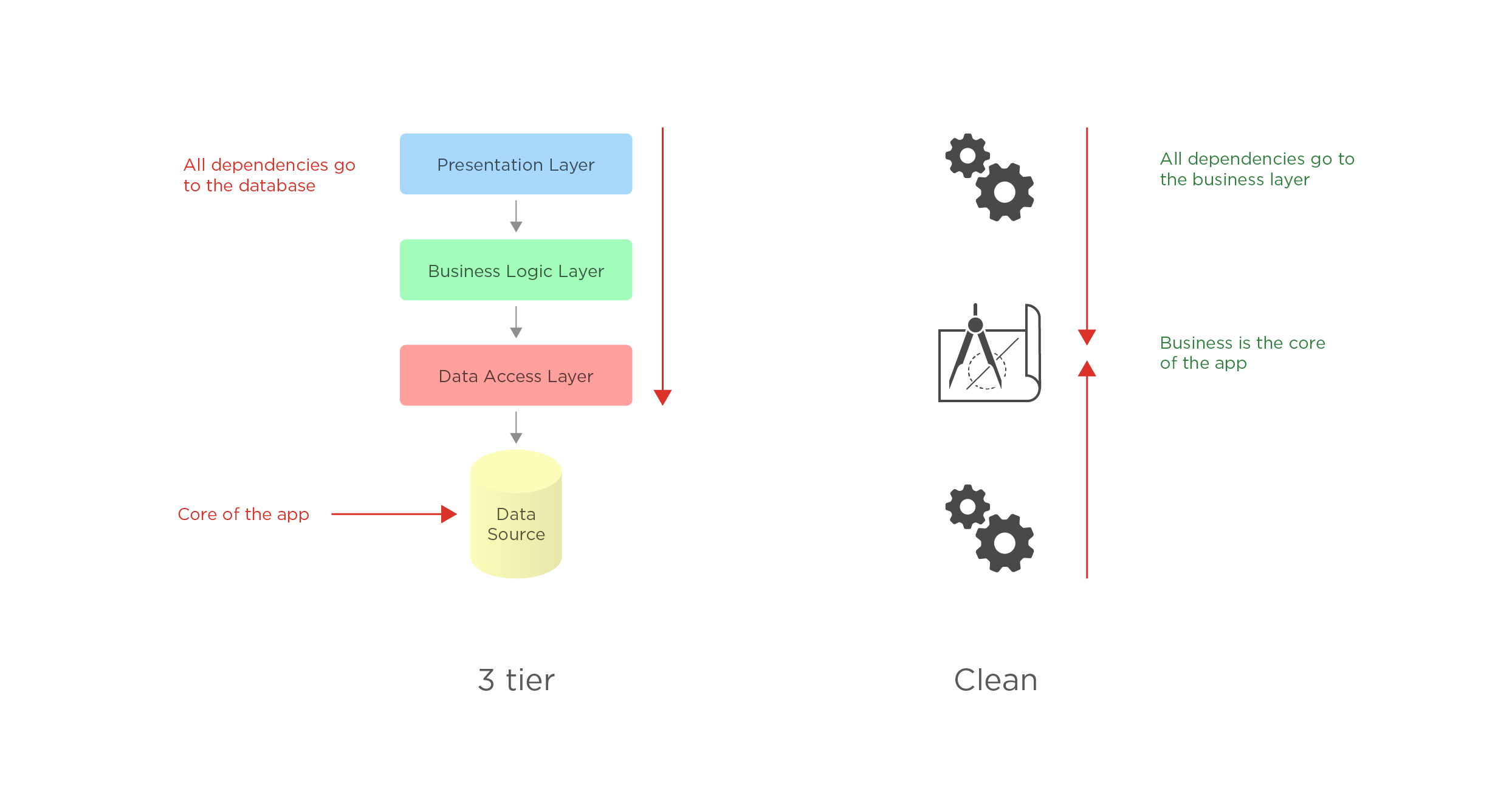 You can see in the diagram that all dependencies in the standard three-tier architecture go to the database. That means that abstraction and dependency don’t match. Logically, the business layer should be the center of the app, but it isn’t, as dependencies go towards the database.

The business layer knows about the database and it shouldn’t. It should be the other way around. Whereas in clean architecture, dependencies go to the business (inner) layer and abstraction also rises towards the business layer, so they match nicely.

This is important because abstraction is the theory and dependencies are the practice. Abstraction is the logical layout of the app, and dependencies are how it is actually composed together. In clean architecture these two match up, while in the standard three-tier architecture they don’t; and this can quickly lead to all kinds of logical inconsistencies and mess if you aren’t careful.

Now that we have divided our app into the modules, nicely separated everything, put business logic in the center of our app and implementation details in the outskirts, everything looks great. But you’ve probably quickly run into an interesting problem.

Business logic is in the middle and should mediate between the internet and the UI, but it doesn’t even know that those two guys exist. This is a question of communication and data flow.

We would like the data to be able to flow from the outer layers to the inner ones and vice versa, but the dependency rule doesn’t allow that. Let’s strip that down to the simplest example. 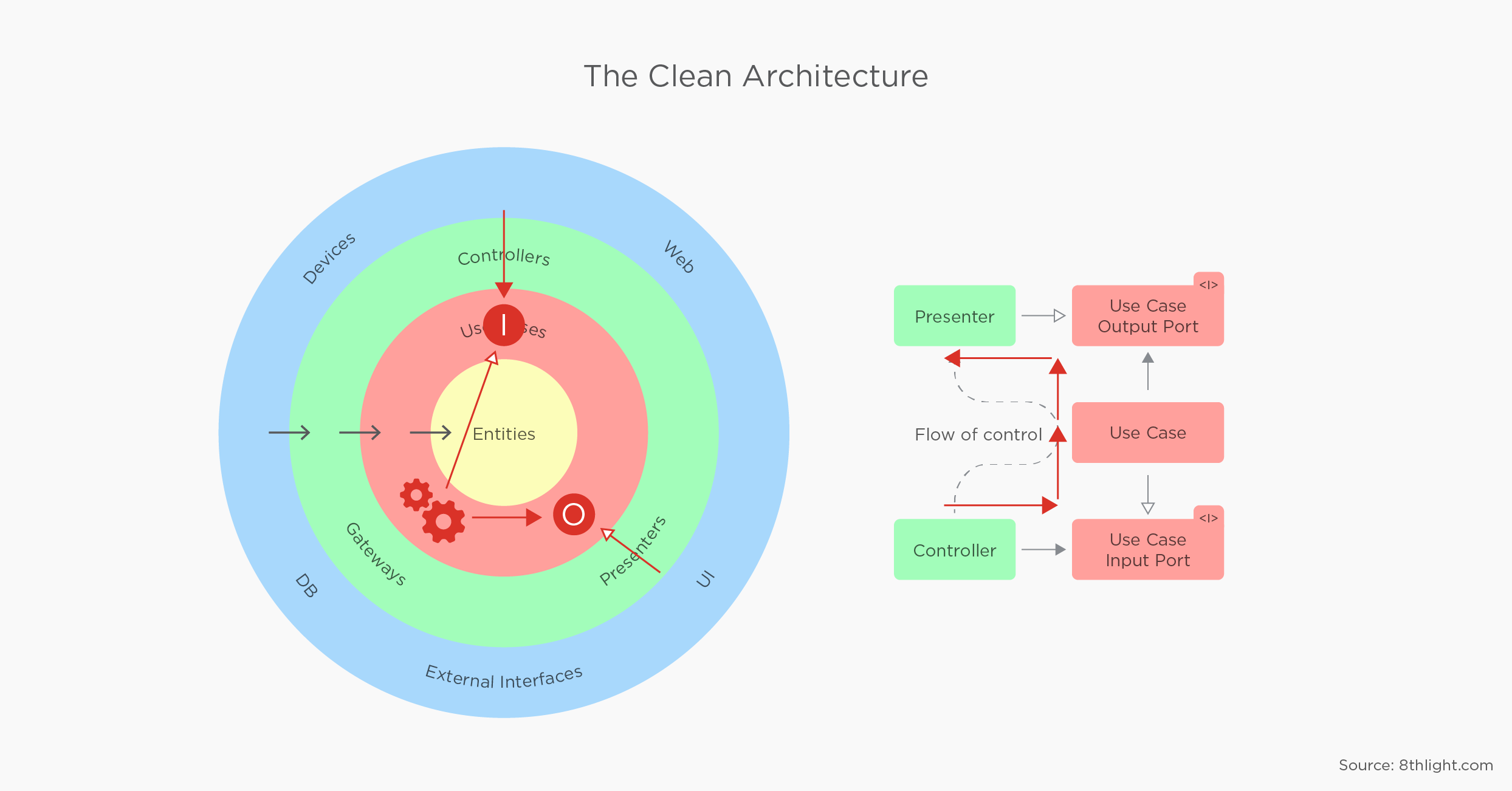 The trick is that the use case knows only its output port; the world ends at this output port. It’s up to the presenter to implement it. It could’ve been implemented by anything, as use case doesn’t know or care, and is aware only of its little world inside its layer. We can see that, by combining composition and inheritance, we can make the data flow in both directions, although inner layers aren’t aware that they are communicating with the outside world. Take a quick glance at the following diagram: 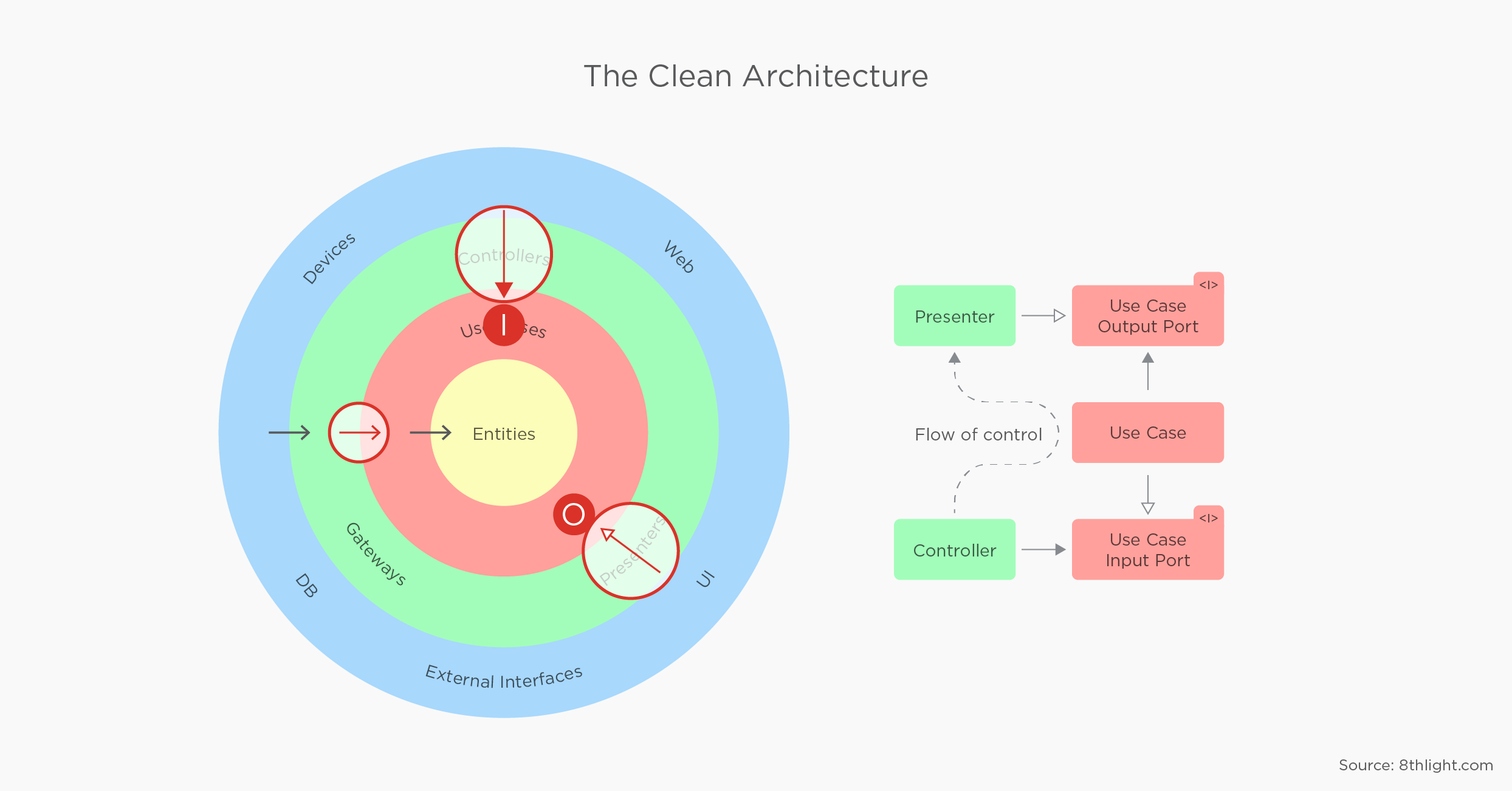 You can see that both has-a and is-a arrows point to the middle—the same as dependency arrows. Well, it’s logical. According to the dependency rule, it’s the only possible way. The outer layer can see the inner layer, but not the other way around. The only tricky part is that is-a  relationship, although it points to the middle, reverses the dataflow.

Notice that it’s the inner layer’s responsibility to define its input and output ports, so that the outer layers can use them to establish communication with it. I’ve said that this solution has already been hinted at before, and it has. The notifications example that illustrated abstraction is also an example of this kind of communication. We have a notifications interface defined in the inner layer that business logic can use to show notifications to the user, but we also have an implementation defined in the outer layer. In that case, the notifications interface is business logic’s output port, which it uses to communicate to the outer world—to the concrete implementation in this example. You don’t have to name your classes FooOutputPort or BarInputPort; we name the ports just to explain the theory.

So, is this overly complicated, overly obscured over-engineering? Well, it’s simple when you get used to it. And it’s necessary. It allows us to make that nice abstraction / dependency match actually communicate and work in the real world. Maybe all of this reminds you of the string theory: beautiful, theoretically elegant, but overly complicated and we still don’t know whether it works, but in our case – it does. :)

So that’s it for the second part of the series. The last, third part, after all that we have learned about the theory and architecture, will cover all you need to know about labels on those diagrams, or in other words – separate components. We will show you a real life clean architecture applied on Android.

This is a part of the Android Architecture blog post series. You can also check out other parts: